Friday, March 19, 2010
Remembering Zulu Sofola: Great woman of theatre
By Yemi Olakitan
IN the 50 years of Nigerian independence, many theatre practitioners,
dramatists and playwrights came on the scene to develop Nigeria's theatre.
The late Professor Zulu Sofola, first female Professor of Theatre Arts in Africa
was one of them. In looking at 50 years of theatre in Nigeria, we will be looking
at the lives of those who have contributed immensely to the development of
the stage performance.
Zulu Sofola was perhaps, the most important female playwright in Africa during
her time. In a male dominated world where the voice of women seemed
unheard and under-appreciated, Zulu Sofola stepped forward and
distinguished herself as a literary icon and an excellent dramatist.
It was a dream that started from her parents. In those days, it was not
fashionable to send female children to school. There was the fear that
educating a girl-child might prevent her from getting a good husband. Zulu's
parents made a different choice from the norm and sent their beautiful
daughter to school not only in Nigeria but also in the United States of America.
Born in Isele Uku to the Okumabua family of Ogbeutu quarters, Zulu attended
secondary school at the Mary Mount College, Agbor, in Delta State before she
traveled to the United States for her university education. She studied at
Virginia Union Baptist Seminary and The Catholic University of America. It was
while she was in the US that she met her husband, the late Professor Adeyemi
Sofola.They both came back home to Nigeria and began their careers in
teaching at the University of Ibadan where she later obtained a PhD in Theatre
Arts.
Zulu Sofola was a woman with a strong passion for African Drama and
Literature and she used her privileged education to tell the story of her people
through her numerous works. She also projected the culture in such a way that
those that belong to other culture were able to appreciate her people. The
theatre scholar used her plays to address issues of justice and individual
freedom. She also used her talents as a playwright to explain the relevance of
culture and traditional practices and their boundaries and limitations in human
relationships and happiness.
In a chat with one of the directors of Zulu's plays, Abiodun Abe, the Technical
Director of the National Theatre of Nigeria, he said Sofola's plays are both
culturally entertaining and educative. ''They are largely traditional and
instructive and they tell tales of love and royalty through tragedies and the
various experiences of human life in such a way that readers and audience
alike are both entertained and informed in one scenario or the other.''
Abe began directing her plays in 1988. He directed Wedlock of the gods in
1988 and Wizard of Law in 1996, as well as King Emene in 1999. Other
directors who have worked on Zulu Sofola's plays include Yomi Adebamigbe
and Kunle Adewole who is the head of the Department of the Performing Arts
in Jalingo, Taraba State University. Till date Zulu Sofola's plays are being
performed in theatres in Europe and America.
Zulu used some of her plays to criticize the mistreatment of females, although
some of her critics have portrayed her as a liberal feminist. They however
acknowledged her status as a brilliant playwright.
In the play, Wedlock of the gods, the playwright questions the tradition that
reduces women to a piece of property that could be passed from one man to
another. This is aside addressing the issue of political savagery often exhibited
by dictators. In King Emene, for instance, she exploits the themes of anger,
jealousy and selfish ambition to mirror the evils of society.
She was the founding coordinator of the three arms of the Performing Arts
department at the University of Ilorin, Kwara State. Each of the departments
was headed by various professionals in their fields such a Dr. Bode Omojola
who headed the School of Music, Chris Ugholo who was the head of the
Dance School, while Professor Akanji Nasiru and Dr. Ayo Akinwale were both
senior lecturers alongside Zulu Sofola at the Drama School. She ran a
professionally bubbling theatre department that kept the university busy and
she was an inspiration to all.
Zulu's writing style was simple and her deep knowledge of the people's culture
reflected in her plays. In fact, her treatment of romantic love in her play is a
reflection of true-life experience, as her storyline seems to mirror society. In
Wedlock of the gods, Ogwoma falls in love with Uloko. The young stars
strongly held on to a belief that the gods have ordained their relationship from
the heaven and that they cannot part.
This story line seems to have a replay in Zulu's life when she met her husband
who was from another tribe. Adeyemi Sofola was a Yoruba man while she was
from Isele Uku in Delta State. There was opposition to the relationships by
both families but Zulu and Adeyemi stood their grounds and they got married.
Their strong love ended when Adeyemi died in 1996 after many years of
marriage. At the funeral service, Prof. Zulu Sofola repeatedly asked what she
was waiting for and in few months later she joined her husband. According to
Abiodun Abe, "it seems that her storyline and plot in Wedlock of the gods,
played out in her own life.
Tools
- April 08, 2011

After recent plans by various stakeholders to unseat the National Chairman of the party, Senator Abdullahi Adamu, the leadership crisis th... 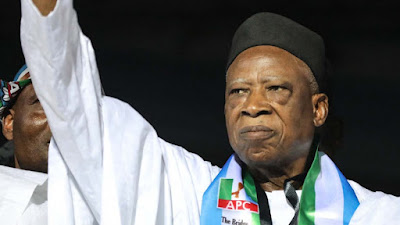 Yemi Olakitan: All you want to know
Yemi Olakitan is a journalist, performing artiste and blogger, based in Lagos, Nigeria. Yemi has worked for many years as journalist in both print and electronic media. Yemi Olakitan is the president of Creative Majesty, an initiative with the aim of providing opportunities and training for aspiring Nigerian artistes in the various sections of the Creative Arts .Yemi can be reached for conferences, workshops, talks, exhibitions, etc at yemisage@gmail.com

Titles and Topics as it Appears In the Blog

Translate In Your Language

IT'S ALL ABOUT NEWS 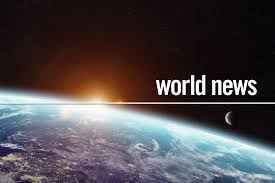 Yemi Olakitan: All you want to know...

Titles and Topics as it Appears In the Blog